Is Lane Splitting Legal in Pennsylvania? 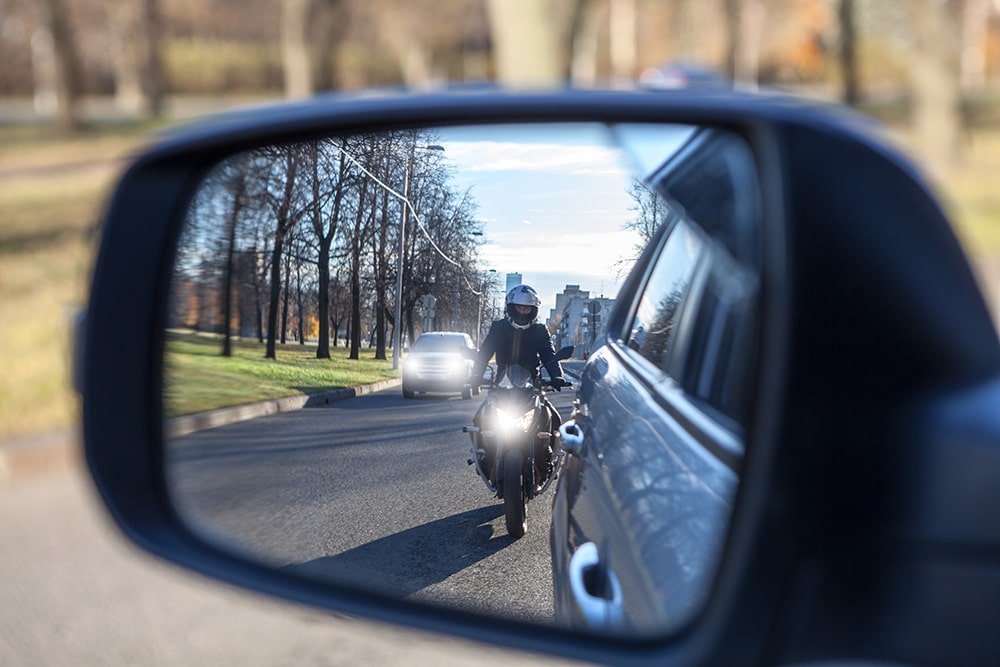 When you ride along with motorcyclists here in Williamsport or elsewhere in Pennsylvania, how often do you notice them attempting to navigate around other vehicles when traffic congestion exists? You likely notice it quite a bit, which may lead you to wonder if their actions are lawful.

While some states allow motorcyclists to split lanes, which is related to but not the same as filtering or lane sharing, doing so is illegal in Pennsylvania. Below, we will discuss what lane splitting is, how dangerous it can be, and whether comparative fault applies in Pennsylvania accidents involving motorcycles.

What Is Lane Splitting?

Motorcycles have the advantage of being small and maneuverable enough that it’s easy to navigate them between lanes. Operating a motorcycle like this is called lane splitting.

Lane splitting is when a motorcyclist rides between lanes of stopped or slow-moving traffic, which can help them avoid being hit from behind by another vehicle in stop-and-go traffic or other precarious traffic situations. As mentioned earlier, while this practice is not legal in Pennsylvania, it doesn’t seem to stop motorcyclists from doing it.

Lane splitting is often referred to as “filtering” or “sharing,” but are they the same? Technically, no, they are not the same. Here’s the difference in the two practices:

How Dangerous Is Motorcycle Lane Splitting?

Lane splitting is not without merit—it can help motorcyclists avoid collisions from behind, and it can also help them escape other hazardous traffic situations. In 2015, a University of California at Berkeley report described how motorcyclists who split lanes in heavy traffic are significantly less likely to sustain head or torso injuries or suffer a fatal incident because of a collision. Nevertheless, lane splitting is still illegal in Pennsylvania.

Furthermore, motorcyclists often engage in lane-splitting when they may be driving fast and aggressively, which can result in accidents. Another Australian study reveals that motorcyclists that regularly engage in “filtering” through traffic and lane-splitting have enhanced perceptual awareness of how to efficiently lane split for the best outcome. While this may seem ideal, study researchers found that this may cause motorcyclists to have a shrinking view of their surroundings, which may contribute to a higher crash risk.

What Happens if You Collide With a Lane Splitting Motorcyclist?

Even though lane splitting is illegal in Pennsylvania, motorists are still advised to be aware of motorcyclists doing this. If you find yourself in an accident in Williamsport, PA with a motorcyclist and they were lane-splitting, you need to remember to treat the accident as you would any other motor vehicle accident. Here’s what you should do:

Even though it’s illegal in Pennsylvania, if you’re caught doing something even more dangerous

than lane splitting, you could be held liable for the accident per Pennsylvania’s law.

Motorists injured in crashes in Williamsport and elsewhere in the state of Pennsylvania would generally tap into their own insurance to pay bills associated with injuries they suffered in a crash given that the no-fault doctrine is in effect here. In that case, an injured motorist would only be able to sue the other vehicle operator for damages if their losses exceeded their own policy limits.

It’s important to note that another doctrine called comparative fault, which is also sometimes referred to as contributory negligence, also applies in Pennsylvania. This rule is particularly relevant in motorcycle accident cases. Comparative fault is a legal doctrine used to determine how much each party is at fault for an accident when fault does matter in the latter case described above.

For example, if a motorcyclist is lane-splitting and is hit by someone, the motorcyclist may be found to be 50% or more at fault for the accident. However, if the driver of the vehicle is doing something illegal or is not paying attention, they may also share some of the blame. As a driver, you could be potentially liable in a motorcycle accident if you’re:

The doctrine of comparative fault is important because it can significantly impact your ability to recover damages from the other party. According to Pennsylvania comparative negligence laws, if you’re more than 50% at fault for an accident, you cannot recover damages from the other party. However, if you’re doing something worse than “white-lining” you could pay damages to the motorcyclist instead. This is why you should speak with an experienced motorcycle accident lawyer from Stapp Law, LLC to learn more about your rights and how making certain statements regarding your crash to the police and insurance company adjusters could impact them.

Lane splitting is a controversial topic because it can be dangerous if done incorrectly, yet there are large organizations supporting lane splitting for motorcyclists. The American Motorcyclist Association (AMA) is one such organization.

The AMA is a motorcyclist’s rights group that has been fighting for lane splitting across the United States; the AMA is not alone in this effort. At the same time, opponents of lane splitting argue that it is dangerous and should remain illegal. Organizations like the American Automobile Association (AAA) are critical players trying to defeat attempts to legalize lane splitting.

If you were in a car accident in Williamsport or any other part of Pennsylvania that resulted from lane splitting, you might be eligible to get compensated. Here at Stapp Law, LLC, we have extensive experience handling cases such as these. We know what it takes to prove liability for accidents like these that often result in some of the most catastrophic injuries or wrongful deaths.

Our motorcycle accident lawyer will help you weigh your options and give guidance on what is best for your specific case. We can also help you deal with both your and the motorcyclist’s insurance company. Don’t just count on anyone to guide you through our state’s civil legal system. Choose an experienced Williamsport personal injury lawyer who will give your accident the attention and dedication it deserves like we will at Stapp Law, LLC.

READ PREVIOUS
How To Calculate the Costs of Future Medical Care

Is Lane Splitting Legal in Pennsylvania?How To Calculate the Costs of Future Medical CareHow Is Nursing Home Abuse Investigated?How To Inform an Insurance Company About an AccidentDefining the Term “Gross Negligence” in Pennsylvania

Is Lane Splitting Legal in Pennsylvania?

When you ride along with motorcyclists here in Williamsport or elsewhere in Pennsylvania, how often do you notice them attempting to navigate around other vehicles when traffic congestion exists? You likely notice it quite a bit, which may lead you to wonder if their actions are lawful. While some states allow motorcyclists to split lanes, […]

How To Calculate the Costs of Future Medical Care

People who suffer paralysis, amputation, cognitive impairment, or other catastrophic injuries typically require medical care for the rest of their lives. Even less-permanent injuries like broken bones and burns can require months or years of treatment and therapy. This often amounts to tens of thousands of dollars in bills. If you were hurt suddenly and […]